Some recent thoughts I’ve had on the study of Hinduism in institutions of higher learning. As usual, pushing for positive changes (adding new viewpoints/ diversity) instead of negative changes (subtracting existing things).

Think about the last time you went to an aquarium. You likely passed by at least one tank that caught your attention – maybe the fish were particularly colorful or diverse. You probably stood around for five minutes or so, looking at the different varieties, pointing them out to your friends. Now imagine those five minutes weren’t enough, and you wanted to dedicate your life to studying some of those fish. You buy a tank, keep it in your study, observe and record what the fish are doing on a regular basis. You come to understand them to some extent. You know what they eat, how they move, perhaps even whether they are in a good mood. But as badly as you want to understand them, even if you were to get inside the tank and swim around, there would just be some things you don’t understand. You will never be a fish.

Far from being an odd trip I just tried to take you on, this analogy explains the current state of Western scholarship on India and Hinduism.

Since my freshman year of undergrad, I have been learning about my religion and country of birth in books written by white, Western scholars. The majority of “renowned” scholarship on Hinduism since the 1700s has been done by European and American scholars. Certainly, some Indian scholars have been doing important and valuable work at Indian universities, but due to the unfortunate power structures of higher learning and a colonial history, Western universities and their published ideas reign supreme. This is compounded, of course, by the fact that those who have immigrated to the US or Europe rarely want their children to study humanities – such things are meant to stay hobbies. Because of the doctor-engineer-lawyer mantra, Indian students in the West are often not in a position to contribute to the academic discourse in powerful Western universities.

This has consequences. While much of the current Western scholarship on Hinduism has produced insightful work and should continue, we need more Hindus studying Hinduism to develop a full, accurate picture of the religion.

In the 1970’s, the term “Orientalism” came about. Back then, it referred to a manner of seeing or studying Eastern societies from a Western lens. Seeing through this Western lens meant having your vision of the East clouded by things like the lingering power dynamics of colonialism, racist undertones, preconceived assumptions about the nature of gender, religion, and relationships, and a desire to “exoticize” the Eastern “other”. The result? If you grow up in the U.S. and learn about Hinduism, you are learning one main message: polytheistic religion that invented caste system and worships cows. While these things are all true to some extent, this is hardly the full picture of the diversity of Hinduism. But these ideas don’t originate in a vacuum! First, scholars of Hinduism espouse certain views on Hinduism. Then these views are distilled by people who oversee textbooks, then perhaps mixed in with some ideas derived from popular culture, and eventually fed to children in Western schools. And finally these views tumble out of kids’ mouths in the form of insults and bullying of Hindu children living in the West.

In the present-day, the word Orientalism is enough to send a shiver up the spine of any white scholar of Hinduism and immediately make them defensive. There has been a concerted effort to distance themselves from that term and ideology, and to their credit, many Western scholars do an amazing job. They expose parts of Hinduism that insiders just might not see, and they make a real effort to immerse themselves and understand (to stick to the fish analogy, some people are starting to develop gills).

However, it would be silly to think we’ve completely moved past Orientalism. For example, much of today’s Western scholarship on Hinduism revolves around two topics: yoga and tantra. 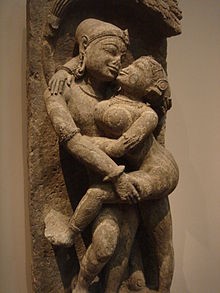 The first seems to be largely for the (self-)interest of understanding something which has become part of Western culture. The second often seems to be a continuation of that desire to exoticize Hinduism – a notion of “let’s see all the ways Hindus could write about sex and odd rituals”. These aspects of Hinduism should not be denied, but the amount of scholarship dedicated to them obscures the truth: most Hindus are not thinking about how to incorporate downward dog into that night’s sex ritual. How about focusing scholarship instead on issues that can make a difference to modern Hindus?

Beyond the focus on certain topics, there is also the issue of lacking context. By assessing the actions of a society with the standards of another, you inevitably pass judgments. In classes, time is occasionally spent hearing the professor and some students basically say “whoa, India is crazy huh?!”. Of course, many of the religious rituals of Western Christianity may seem “crazy” to Indians, but that nuance is lost when there are not enough Hindu students in the classroom or Hindu professors in institutions of higher learning. The onus is on Hindus living in the West to get involved with the study of religion (I’m trying to do my part!). Then, if insider perspectives are given the voice they deserve, scholarship and teaching can both improve significantly: published articles and books on Hinduism will have a broader set of perspectives, and classrooms will afford different types of education to students of Hinduism.

Today is not the Orientalism of the 70’s, but a new breed. It is one that continues to exoticize the East and Hinduism, through the dominant power structures of the world, but then tries to point the finger of appropriation every which way except at itself. I’m not saying I expect people to magically be able to take the perspective of a worldview that is so fundamentally different than their own. I’m not saying the West shouldn’t study Hinduism through classrooms and scholarly articles. By all means, let’s learn about each other’s cultures, and let’s give Hinduism the attention it deserves as the third-largest religion. Let’s even expose the flaws of Hinduism and the way it’s being politicized. I’m just saying that there’s a way to do this with respect, dignity, sympathy, and consideration of what Hindus think and need. To achieve that, we need more insider perspectives, we need more attention to popular religion, and we need more sensitivity from outside perspectives. If you’re going to come and look at the fish tank, just don’t tap on the glass.

4 thoughts on “Don’t Tap on the Glass”